The mainstream American media is, again, happily hitting the Black Lives Matter crack pipe in its pernicious pursuit of high ratings. These blood-lusting junkies were nowhere to be found when, with haunting predictability, Chicago news headline after headline detailed the carnage that has consumed dozens of communities in that city where black men kill each other with terrifying regularity.

Where were these Black Lives Matter protesters after the slaying of Chicago’s little Tyshawn Lee, the 9-year-old lured into an alley and shot to death by a black man seeking gang-related vengeance against his father?

Did little Tyshawn’s murder at the hands of a black gangster–an all too common occurrence in Chicago–not warrant wall-to-wall news coverage or Al Sharpton and Jesse Jackson-style calls for “justice”?

Because the ugly truth behind #BlackLivesMatter is that black people killing other black people does nothing to advance its political power in the same way that one white cop killing a black criminal can.

Despite the media’s overindulgence on white cops killing blacks, there is still a far-larger amount of black bodies being sent to morgues by black killers. Here’s five devastating facts, liberals can’t deny, that prove it.

In other words: black people–at just a fifth of the size–committed almost 1,000 more murders than their white counterparts.

The figures above highlight a horrific truth that black racialists and white liberals routinely ignore: Lawbreaking black Americans, young black males particularly, put themselves in close proximity to (mostly white male) police officers at rates sometimes five to 10 times higher than whites. This is a recipe for disaster. Thusly….

FACT 3. Despite making up just 13% of the population, blacks committed half of homicides in the United States for nearly 30 years.
DOJ statistics show that between 1980 and 2008, black people committed 52% of homicides.
In 2013, black criminals committed 38% of the murders. Whites accounted for just 31 percent.

There are five times fewer black people than white people in America and, yet, they consistently carry out a larger share of the crimes? Given this rate, it’s no wonder that there aren’t more assistances where cops kill black criminals.

FACT 4. Chicago’s death toll is almost equal to that of both wars in Iraq and Afghanistan, combined.
There have been almost as many deaths in one American city as there have been in the two major wars carried out by the U.S. military this century.

FACT 5. It would take cops 40 years to kill as many black men as have died at the hands of others black men in 2012 alone.
University of Toledo criminologist Dr. Richard R. Johnson examined the latest crime data from the FBI’s Supplementary Homicide Reports and Centers for Disease Control and found that an average of 4,472 black men were killed by other black men annually between Jan. 1, 2009, and Dec. 31, 2012.
Professor Johnson’s research further concluded that 112 black men died from both justified and unjustified police-involved killings annually during this same period. 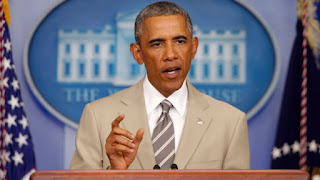 Last year at a NATO summit, Obama explicitly disavowed the idea of containing ISIS. "You can't contain an organization that is running roughshod through that much territory, causing that much havoc, displacing that many people, killing that many innocents, enslaving that many women," he said.

Instead he argued, "The goal has to be to dismantle them."

Just before the Paris massacre, Obama shifted back to containment. “From the start, our goal has been first to contain them, and we have contained them,” he said.

Pay no attention to what he said last year. There’s a new message now. Last year Obama was vowing to destroy ISIS. Now he had settled for containing them. And he couldn’t even manage that.

ISIS has expanded into Libya and Yemen. It struck deep into the heart of Europe as one of its refugee suicide bombers appeared to have targeted the President of France and the Foreign Minister of Germany. That’s the opposite of a terrorist organization that had been successfully contained.

Obama has been playing tactical word games over ISIS all along. He would “degrade and ultimately destroy” ISIS. Or perhaps dismantle the Islamic State. Or maybe just contain it.

Containment is closest to the truth. Obama has no plan for defeating ISIS. Nor is he planning to get one any time soon. There will be talk of multilateral coalitions. Drone strikes will take out key figures. And then when this impressive war theater has died down, ISIS will suddenly pull off another attack.

And everyone will be baffled at how the “defeated” terrorist group is still on the march.

The White House version of reality says that ISIS attacked Paris because it’s losing. Obama also claimed that Putin’s growing strength in Syria is a sign of weakness. Never mind that Putin has all but succeeded in getting countries that were determined to overthrow Assad to agree to let him stay.

Weakness is strength. Strength is weakness.

Obama’s failed wars occupy a space of unreality that most Americans associate with Baghdad Bob bellowing that there are no American soldiers in Iraq. (There are, according to the White House, still no American ground forces in Iraq. Only American forces in firefights on the ground in Iraq.)

There’s nothing new about any of this. Obama doesn’t win wars. He lies about them.

The botched campaign against ISIS is a replay of the disaster in Afghanistan complete with ridiculous rules of engagement, blatant administration lies and no plan for victory. But there can’t be a plan for victory because when Obama gets past the buzzwords, he begins talking about addressing root causes.

And you don’t win wars by addressing root causes. That’s just a euphemism for appeasement.

Addressing root causes means blaming Islamic terrorism on everything from colonialism to global warming. It doesn’t mean defeating it, but finding new ways to blame it on the West.

Obama and his political allies believe that crime can’t be fought with cops and wars can’t be won with soldiers. The only answer lies in addressing the root causes which, after all the prattling about climate change and colonialism, really come down to the Marxist explanation of inequality.

When reporters ask Obama how he plans to win the war, he smirks tiredly at them and launches into another condescending explanation about how the situation is far too complicated for anything as simple as bombs to work. Underneath that explanation is the belief that wars are unwinnable.

Obama knows that Americans won’t accept “war just doesn’t work” as an answer to Islamic terrorism. So he demonstrates to them that wars don’t work by fighting wars that are meant to fail.

In Afghanistan, he bled American soldiers as hard as possible with vicious rules of engagement that favored the Taliban to destroy support for a war that most of the country had formerly backed. By blowing the war, Obama was not only sabotaging the specific implementation of a policy he opposed, but the general idea behind it. His failed wars are meant to teach Americans that war doesn’t work.

Whatever rhetoric he tosses out, his actual strategy is to respond to public pressure by doing the least he can possibly do. He will carry out drone strikes, not because they’re effective, but because they inflict the fewest casualties on the enemy.

He may try to contain the enemy, not because he cares about ISIS, but because he wants to prevent Americans from “overreacting” and demanding harsher measures against the Islamic State. Instead of fighting to win wars, he seeks to deescalate them. If public pressure forces him to go beyond drones, he will authorize the fewest air strikes possible. If he is forced to send in ground troops, he will see to it that they have the least protection and the greatest vulnerability to ISIS attacks.

Obama would like ISIS to go away. Not because they engage in the ethnic cleansing, mass murder and mass rape of non-Muslims, but because they wake the sleeping giant of the United States.

And so his idea of war is fighting an informational conflict against Americans. When Muslim terrorists commit an atrocity so horrifying that public pressure forces him to respond, he lies to Americans. Each time his Baghdad Bob act is shattered by another Islamic terrorist attack, he piles on even more lies.

Any strategy that Obama offers against ISIS will consist of more of the same lies and word games. His apologists will now debate the meaning of “containment” and whether he succeeded in defining it so narrowly on his own terms that he can claim to have accomplished it. But it really doesn’t matter what his meaning of “containment” or “is” is. Failure by any other name smells just as terrible.

Obama responded to ISIS by denying it’s a threat. Once that stopped being a viable strategy, he began to stall for time. And he’s still stalling for time, not to beat ISIS, but to wait until ISIS falls out of the headlines. That has been his approach to all his scandals from ObamaCare to the IRS to the VA.

Lie like crazy and wait for people to forget about it and turn their attention to something else.

This is a containment strategy, but not for ISIS. It’s a containment strategy for America. Obama isn’t trying to bottle up ISIS except as a means of bottling up America. He doesn’t see the Caliph of the Islamic State as the real threat, but the average American who watches the latest beheading on the news and wonders why his government doesn’t do something about it. To the left it isn’t the Caliph of ISIS who starts the wars we ought to worry about, but Joe in Tennessee, Bill in California or Pete in Minnesota.

That is why Obama sounds bored when talking about beating ISIS, but heats up when the conversation turns to fighting Republicans. It’s why Hillary Clinton named Republicans, not ISIS, as her enemy.